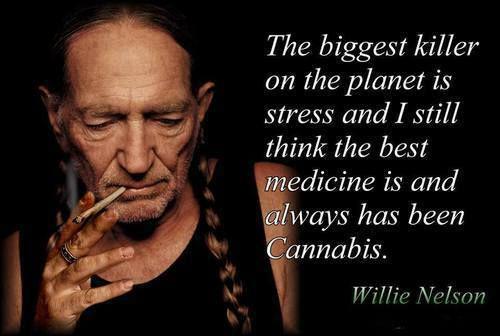 So, is cannabis good for you?

If you asked somebody like Willie Nelson, who stand-up comic Bill Maher called the ‘Founding Father of Stoning’, the answer would be simple: it relieves stress and that alone keeps you healthy.

If you asked a doctor about the role stress plays on our overall health, here is the simplest answer you would get: stress directly affects and weakens the immune system. In Star Trek terms, that’s your body’s force field going weak, making you fair game for disease causing microbes.

Stress also promotes lifestyle diseases like diabetes and high blood pressure. That is probably the reason why ‘outlaw’ Willie Nelson did not bat an eyelid when he came on the Larry King Live show and said that he had had a toke right before the interview.

It is important to ask if a legend like Willie Nelson, who is also in his 80s, would promote a naturally growing herb if it did not help him. Does he have any need to lie about it, especially at his age? We believe that his view comes from the conviction he has developed all through his life, for which he has had to suffer legal censure in his home state.

He added that he did not smoke it anymore but used a vaporiser instead, as he was not fond of smoke now. He also added that personal experience had proved to him that marijuana did not have any side-effects that were worrisome. He went on to add that the only time he saw a man die of marijuana was when a huge bale of the plant fell on him accidentally.

According to Laura Borgeit, PharmD, University of Colorado, your body already produces marijuana-like chemicals that affect pain or inflammation and other processes that regulate your system. What marijuana does is boost the power of these natural bio-chemicals and make them work better.

The efficacy of cannabis in fighting stress is a profound one and has a very long history. The oldest cultures of the world used it to counter anxiety and stress since thousands of years now. We shall talk about that in the next post.

While we may not know the exact science behind how this happens even today, it is known that it has something to do with the body’s endocannabinoid (ECB) system. Since the ECB system is a fairly new medical discovery, there is not enough information as to how marijuana fortifies and helps this system function better.

Researchers say that the ECB system naturally regulates stress in the body by releasing chemicals that belong to the same class of chemicals found in marijuana, which are called cannabinoids. Till now, over 60 chemicals have been discovered which may help the ECB system. Interestingly, tetrahydro cannabinol or THC, which is considered the main psychoactive substance in marijuana, is almost a twin of anandamide, which is one of the first endocannabinoids discovered in humans.

While studies as to how marijuana works with the ECB system are on across the world, there is a growing community of scientists and researchers who believe that THC alone cannot do what the entire array of chemicals in marijuana can.

Researchers say that only when CBD (Cannabidiol), the other chemical found in marijuana, acts with THC, it produces the feeling of well-being and euphoria associated with the plant.

While we wait for the science of the plant and our body to reveal it totally, what we know for sure is that administration of marijuana shows significant results in bringing down stress and promoting overall mental and physical well-being.

This is the need of the hour for those of us who live in urban areas and are in the grip of unrelenting schedules.

When you are racing against the clock all the time, who wouldn’t want a natural stress-buster?